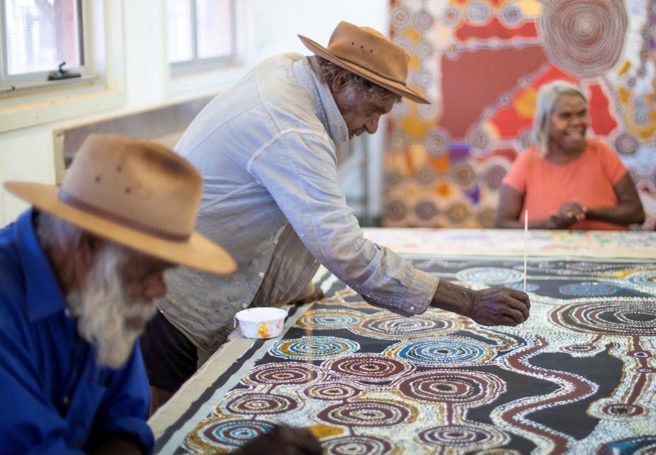 We are proud to present the new group show from Kaltjiti Arts – Kulintja Wiru (Thinking of Good Things).

Kaltjiti Arts and Crafts is a community based, Aboriginal art centre in the remote community of Fregon in the Anangu Pitjantjatjara Yankunytjatjara (APY) Lands of South Australia.  The heart of the small community is the Art Centre which is a place of inspiration, dynamism and a cultural focal point.

Through their artworks, elders and senior artists teach younger generations about important cultural traditions and stories, passing on knowledge that has come to them from their ancestors.

Katjiti Arts is known as an Art Centre with diversity of aesthetic and a depth of talent. Senior artists enjoy the opportunity of working together on collaborative major works, which are also used to teach younger generations skills in painting technique and story telling. It is this commitment to Tjukurpa and traditional painting technique which has allowed Kaltjiti Arts to establish a reputation as being an art centres of that creates artworks of the highest quality, which are also rich in cultural integrity.

All enquiries to Toby Osmond

Thank you to the Artists and Kaltjiti Arts for the privilege and opportunity.