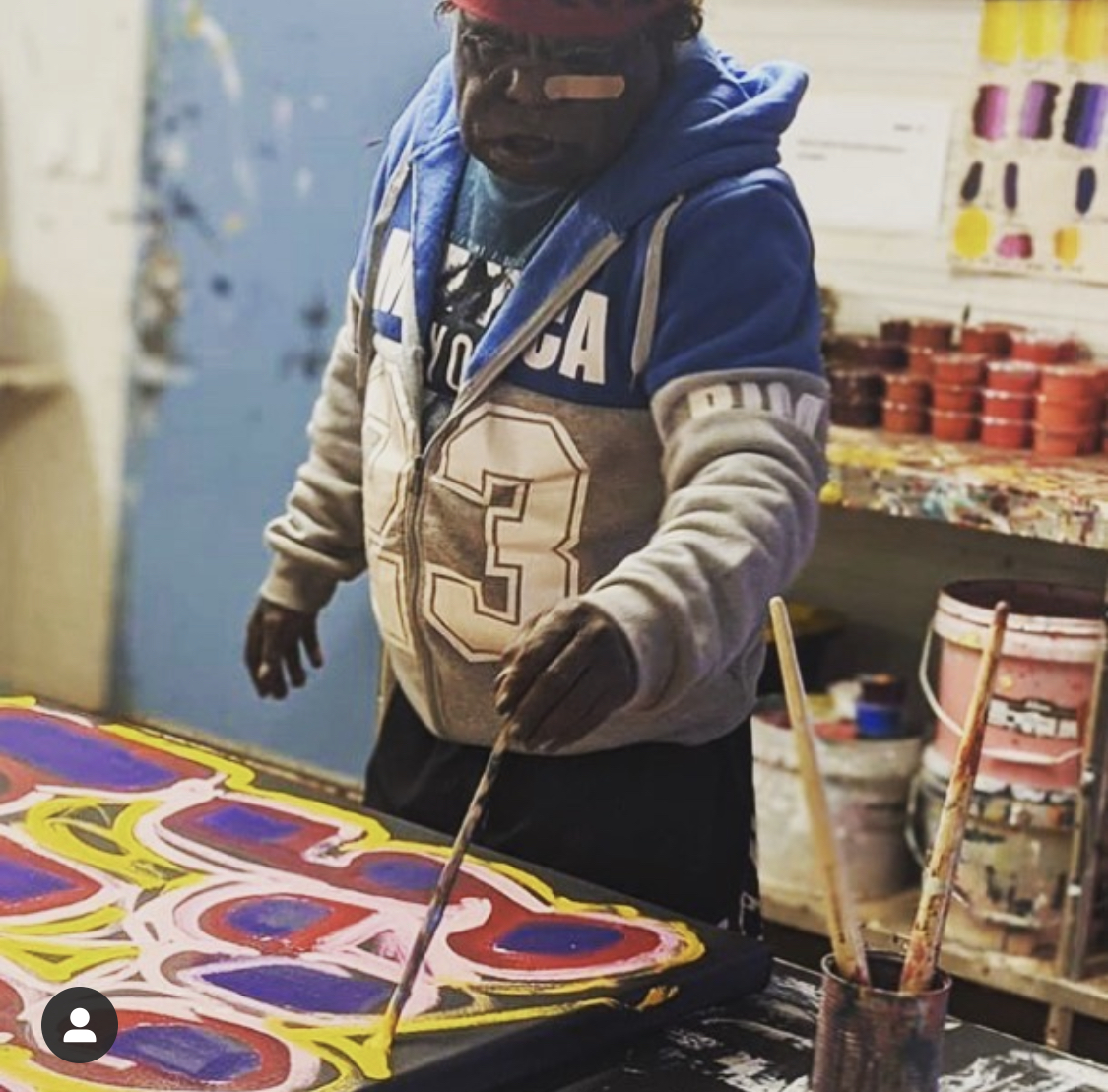 The Yaama Ganu Gallery is proud to present the new show Tjukurla Masters.

Nyarapayi Giles (dec.) was one of the respected elders of Tjukurla Community. Nyarapayi was born in the Gibson Desert at an important cultural site called ‘Karku’. It is this site and the associated Tjukurpa that inspired her powerful and unique paintings. Nyarapayi spent her youth living the traditional nomadic life of her people unil her family were moved from their land to settle in
missions in the 1960’s. Nyarapayi’s knowledge of the Inma (ceremonies) and Tjukurrpa (dreaming stories) associated with the country here is extensive. Nyarapayi settled in Tjukurla when the community was first established in the 1980s. She worked with ‘purnu’ (wood carving) and enjoyed hunting in the bush right up until her passing. She learned to make baskets woven from spinifex
in the 1980’s and has a large basket on permanent exhibition at the Queensland Art Gallery. Nyarapayi Giles works explore her country and associated Tjukurrpa in an exquisite and unique expression of colour and movement. Nyarapayi has gained recognition as a key artist amongst her peers in the Contemporary Indigenous Art movement. Her works are collected by collectors and
institutions in Australia and internationally.

Written by Elizabeth Marrkilyi (Katjarra’s neice). Katjarra was born quite close to Kulkurta and Purrungu at a place called Kuun.Kuun is the name of the waterhole there. Kuun is also the name of the yellow ochre. There is also a place very close to Kuun that Katjarra refers to as her home and is one of her Tjukurrpa or dreaming which she paints. It is called Kuurmankutja. This place is home to the two Kuniya (python) dreaming. The other dreaming that she paints is Marrapirnti. Her father was Lilyiwara Tjungurrayi and her mother was Mangkatji Nangala. Katjarra had an older sister Nguya Napaltjarri and younger brother Peter Tjanpaltjarri, now both deceased. Katjarra lived with her parents, sibblings and immediate family in the bush as a child, teenager and young married woman. She lived with her family and later with her husband in the country to the west of Tjukurla in the Kulkurta area which is south of the Baron Range in Western Australia. Katjarra lived a traditional nomadic lifestyle only, travelling families within their family’s country and lived off the animals that they hunted and bush food that they collected. They collected and drank water from the rockholes, soakages, springs and claypans (waterholes). All the travelling was done on foot.

Bob Gibson Tjungarrayi was born at Papaya in 1974, before moving with his family to Tjukurla during the Papunya Tula movement of the 1980s, where many Ngaanyatjarra people moved to be closer to their ancestral homelands. Bob’s mother Mary Gibson, also a leading Tjarlirli artist, is from the country of Kulkurta, his father’s country was near Patjarr. Bob has been painting with Tjarlirli Art since 2007 and quickly found a unique rhythm and approach to painting; bold colours and an inimitable freedom, expressing ancient stories with contemporary flair. Bob is a vibrant character who is well loved within his community and offers support to many family members. He is a keen Sydney Swans supporter and loves listening to all music, especially the local bush bands. Looking at a Bob Gibson painting feels a little like spending time with the artist himself. Bob’s bold, playful presence in the studio is contagious; each canvas brings wild shapes and expressive line met with decisive mark-making and confident realisation of country. His highly unique representations of tjukurpa are an intersection of traditional storytelling and a spirited contemporary artistic practice. This work is important as it speaks to the complex layers and tensions between cultural, historical and modern influences.