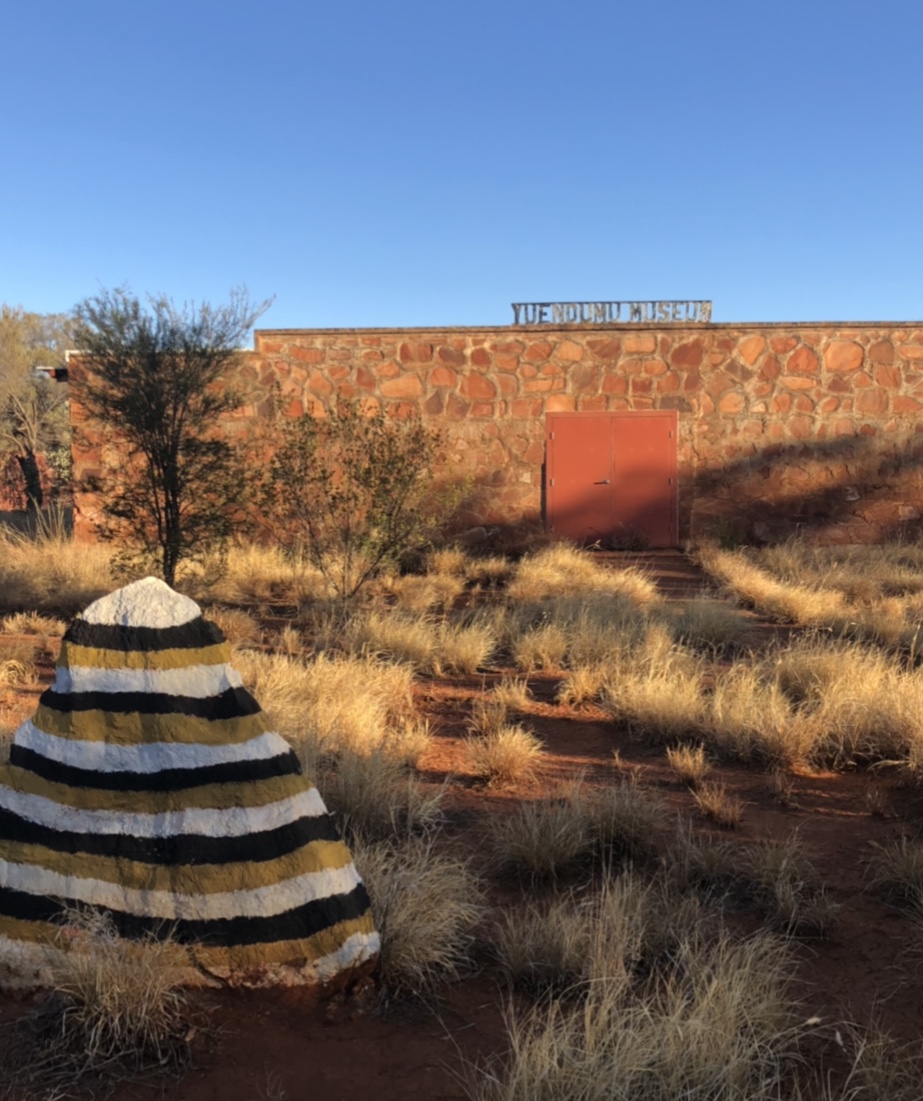 We are proud to invite the Warlukurlangu Artists back to the gallery for our 2018 Christmas Show. ‘Passage’ celebrates the Yuendumu Artists across four generations – featuring the work of Paddy Japaljarri Sims (dec), Murdie Nampijinpa Morris, Stephen Jupurrurla Nelson and Vanetta Nampijinpa Hudson.

Paddy Japaljarri Sims was born in about 1917 at Kunajarray (Mt Nicker), south-west of Yuendumu at a site where a number of Dreaming tracks interconnect. He died in 2010 in Yuendumu. He left behind his wife Bessie Nakamarra, his seven children and many grandchildren and great grandchildren. Paddy sometimes worked in collaboration with his wife, who was an acclaimed artist in her own right. His wife lived in Yuendumu, a remote Aboriginal community 290 km north-west of Alice Springs in the Northern Territory of Australia. She died in 2012. Paddy lived in his country as a young, single man. Back then Warlpiri people wore hair string belts that they had made. When Japaljarri was young he worked sawing mulga trees for wood and for fuel for fires. Later Paddy became involved with gardening and farming in the Yuendumu district. This included growing watermelons, cucumbers, carrots, tomatoes and other vegetables. The farming was at Four Mile Bore where they had chickens, pigs, ducks and other animals. All his life he hunted for goanna, kangaroo, emu and other animals each day for bush tucker and Paddy passed on his hunting knowledge to many young men in the community. This also led him to working at the Yuendumu school teaching Jukurrpa (Dreaming), painting, hunting, traditional dancing, bush tucker and helping out on excursions ‘out bush’ as well as to Alice Spring and Darwin. Paddy Painted with Warlukurlangu Artists Aboriginal Corporation, an Aboriginal owned and governed art centre, for a long time. In 1988 Paddy Sims was selected by The Power Gallery, Sydney University to travel to Paris with five other Warlpiri men from Yuendumu to create a ground painting installation at the exhibition ‘Magiciens de la Terre’ at the Centre Georges Pompidou. The trip took place in May 1989 and the painting was received with world-wide acclaim. Paddy was also one of the senior male artists who worked on the Yuendumu Doors. In 2000 Paddy Japaljarri Stewart undertook to produce 30 etchings of the original Yuendumu Doors in collaboration with Paddy Japaljarri Sims and under the guidance of Basil Hall, Northern Editions Printmaker (Northern Territory University). The first print of the etchings was all on one page and had its debut alongside the Yuendumu Doors when they were exhibited in Alice Springs. The etchings in a set were launched in 2001, to great acclaim with the set winning the Telstra, 16th National Aboriginal and Torres Strait Islander Art Award, for works on paper. Paddy has painted and exhibited regularly with Warlukurlangu Artists both nationally and internationally since 1985. Japaljarri’s Jukurrpa stories or Dreamings include Yiwarra (Milky Way), Ngarlkirdi/Warna (witchetty grub/snake), Warlu Kukurrpa (fire), and Yanjirlpirri (star). In his early work he often chose to work in tones of blue, pink and purple but later used traditional iconography and an unrestricted palette to develop a modern individualist style to depict his traditional Jukurrpa. His work has been included in numerous general exhibitions of Aboriginal art including Dreaming: The Art of Aboriginal Australia, The Asia Society Galleries, New York, 1988; The Continuing Tradition, Australian National Gallery, Canberra, 1989; Mythscapes: Aboriginal Art of the Desert, National Gallery of Victoria, Melbourne, 1989; Lete Australian Montpellier, Musee Fabre, France, 1990.

Murdie (Maudie) Nampijinpa Morris was born in the 1930s at Rabbit Flat, a tiny settlement in the middle of the harsh Tanami Desert in the Northern Territory of Australia about 160 km from the Western Australia border and 315 km north-west of Yuendumu.  Her parents would have taken her out bush in around Nyirripi area, showing her sites and teaching her the traditional ways of her country.  In the early 1980s she settled in Yuendumu and worked at the Old People’s Home – a Program that cares for the elderly by helping them when they are sick, and being with them when they are alone or when they are frighten during storms. She was married but is now a widowed woman. She never had children.

Murdie has been painting with Warlukurlangu Artists Aboriginal Corporation, an Aboriginal owned and governed art centre located in Yuendumu, since 2012. She was prompted to paint when she attended a workshop in 2012. She enjoys painting, and paints her father’s jukurrpa, Maliki Jukurrpa (Domestic Dog Dreaming) and Malikijarra Jukurrpa (Two Dog Dreaming). Dreamings that have been passed down through the generations for millennia and relate directly to the land, its features and the animals and plants that inhabit it. She uses an unrestricted palette to develop a modern interpretation of her traditional culture.

Steven Jupurrurla Nelson was born 30 August 1978 in Alice Springs, NT. He is a lifelong resident of Yuendumu, a remote Aboriginal community approximately 300 kilometers northwest of Alice Springs on the Tanami road. He was raised by his late mother, Nora Nungarrayi Jurrah, and his stepfather, Frankie Jakamarra Nelson. His father John Jampijjinpa Brown. he was a resident of Papunya. Steven has two siblings from the same mother different father, his brother Greg Jupurrurla Wood who lives in Uluru he is a ranger, Roslyn Napurrurla Gibson (deceased).

Steven began painting at Warlukurlangu Artists Aboriginal Corporation in late 2014 after working at the art centre for some time. He typically paints ‘janganpa Jukurrpa’ (brush-tail possum Dreaming) from his mother’s side. His country is located near Nyirrpi, another remote Aboriginal community approximately 170 kilometers west of Yuendumu. His mother’s and grandfather’s country is also in this area. His mother’s country includes the Nginyirrpalangu outstation. His grandfather, Banjo Patterson, owned country that includes Ngarupalya.

Steven enjoys the work and process of painting at Warlukurlangu. When he is not painting, he likes to relax at home, walk around the community with his dog Xena, and go hunting for kangaroos.

Vanetta Nampijinpa Hudson was born on 7 April 2001, in Alice Springs Hospital, the closest hospital to Nyirripi, a remote aboriginal community located approximately 430 km north-west of Alice Springs in the Northern Territory of Australia. She is the daughter of Daphne Napururrla White and Peter Hudson and has two sisters. She is the granddaughter of Ursula Napangardi Hudson and Freda Napaljarri Jurrah. Vanetta went to the local school in Nyirripi before attending Worawa Aboriginal College in Melbourne, Victoria. A private boarding school catering for girls in the middle years of schooling. When she finished schooling she returned to Nyirripi.

Vanetta began painting with Warlukurlangu Artists Aboriginal Corporation, an Aboriginal owned and governed art centre located in Yuendumu and Nyirripi, in 2017. She paints her father’s Warlukurlangu Jukurrpa (Fire Dreaming), stories which relate directly to her land, its features and the plants and animals that inhabit it. These stories were passed down to her by her father and his father before him for millennia. She uses pattern and colour to develop a modern interpretation of her traditional culture.

When Vanetta is not painting, she likes to play softball or basketball with her friends.

“The Yuendumu Men’s Museum first opened in 1971 as a repository for Warlpiri art and heritage. From the very beginning this was a Warlpiri project, the first of its kind in Aboriginal Australia. The building was designed for ceremonial events, for their remarkable ground paintings, and to house important objects.

More than forty years later the Yuendumu Men’s Museum has been sensitively restored, under the direction of Warlukurlangu Artists, Cecilia Alfonso & Gloria Morales.

Senior men have decided that its extraordinary wall murals can now be seen by a wider audience. These murals represent the key Jukurrpa or Dreamings of the eight Warlpiri skin groups. The power and vigour of these paintings is astounding. They will assure the Museum of a new place in national and international art history.”

Philip Jones “A Desert Revelation: The Murals of the Yuendumu Men’s Museum”