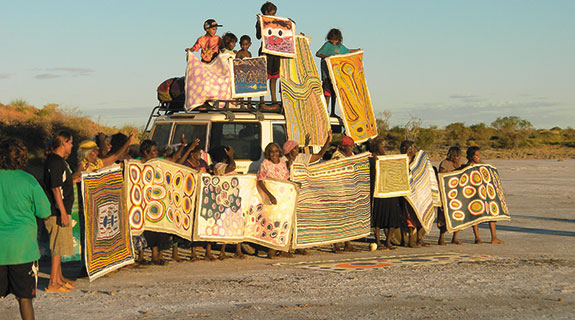 “I paint to tell the kids where we are from, where all the older people really come from. Painting makes me feel purkurlpa (good inside)”. – Muni (Rita Simpson).

“People wanted to do artworks, but there was nothing really set up for that to happen easily”. – Nola Taylor (Ngalangka).

The Martu are the traditional owners of a vast area of the Great Sandy, Little Sandy and Gibson Deserts. Their country stretches from the Percival Lakes in the north, to Lake Disappointment in the south, and runs east, across the Canning Stock Route to the WA/NT border. Many Martu people ceased living a Pujiman (entirely traditional, desert) life only in the 1950s and 1960s. After spending some years on missions and stations, most Martu are now based in remote desert communities and regularly visit regional centres such as Newman and Port Hedland. The Martu are one people, encompassing Manyjilyjarra, Kartujarra, Putijarra and Warnman language speakers.

Nola Taylor, a Martu artist, says Martu were initially hesitant about creating an art centre because they wanted to be sure that they would have control over the way their works were presented to a wider audience. The community wished to make its own decisions and not risk allowing other people – no matter how well intentioned – having too great an influence on important decisions.

While still wary about the art market, Martu actively sought out opportunities to extend their art practices. In 2001, Martu contracted Galliano Fardin to facilitate painting workshops for the community at Parnngurr. Galliano had lived in Parnngurr and Punmu when his wife was teaching in those schools, and Martu people considered him a good teacher because he never told people what to paint. He encouraged people to paint their own country and their own stories, and his classes focussed on drawing and painting skills. Around this time, many Martu women began making baskets: they say this began when Eubena Nampitjin (from Balgo community) taught some of the senior women her approach to working with fibre. Since then, Martu women’s weaving practices have developed and diversified though their own experimentation as well as a series of workshops facilitated by established fibre artists. The women’s contemporary designs deliberately reference traditional Martu objects. Nola says, “I like to make piti (water carriers traditionally made from timber) out of grass so people can remember what Martu made in Pujiman (bushman) days.” Throughout this time, Martu men continued carving timber for both practical and aesthetic purposes, as they did during Pujiman, mission and station times.

So many people were talking about making artworks that in 2003 the Parnngurr community organised a three-day, Martu-language meeting to plan a distinctly Martu arts enterprise. This meeting got many people thinking about how they would like an arts enterprise to operate. Their talking only became louder when two exhibitions at the Courthouse Arts Centre and Gallery in Port Hedland featured Martu art works:

Billy Atkins’ 2004 show ‘Jila Kurra’ and the Taylor family’s ‘Taylor Made’ exhibition. Nola Taylor says that while the recognition during this period was good for the exhibiting artists, they wanted to develop an art centre for all Martu people: “We wanted to find out the best way to do things and make sure that it was all set up properly,” she said.

Martumili works in the Martu communities of Parnngurr, Punmu, Kunawarritji, Jigalong, Irrungadji/Nullagine and Parnpajinya/Newman from a central office generously hosted by the Shire of East Pilbara in Newman. One way in which Martumili Artists has been responsive to the wishes of the Martu artists as a group has been by establishing art spaces and studios which allow artists to work in their own communities. Since most of the communities are separated by a half days’ drive, this has been logistically complex, but remains critical to the success of a distinctively Martu arts centre.

The strength of Martu artists’ commitment to artistic practice is visible not only in their artwork, but also in the markedly independent, rigorous and practical path Martu people followed in establishing Martumili Artists. Making artworks, and managing the way those artworks are sold and exhibited are key ways in which Martu people are working to keep their culture strong.