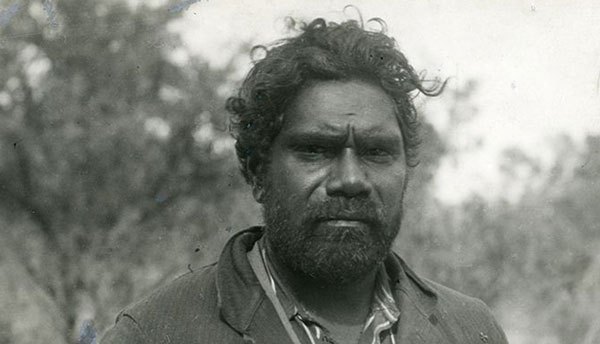 Albert Namatjira is one of Australia’s great artists, and perhaps the best known Aboriginal painter. His western style landscapes – different to traditional Aboriginal art, made him famous. Fame led to Albert and his wife becoming the first Aborigines to be granted Australian citizenship. It was a significant achievement, because at this time Aborigines had few rights. He wasn’t born Albert Namatjira. His parents called him Elea. But after moving to an Aboriginal mission (Hermannsburg) and adopting Christianity, they baptised and renamed their son.Mission life was nothing like the life Albert Namatjira’s people lived in the deserts of the Northern Territory. That was a lifestyle he knew little about, until he turned thirteen. At the age of thirteen Albert experienced an important Aboriginal ritual – initiation. As one of the Aranda group, he lived in the bush for six months and was taught traditional laws and customs by tribal elders. Work as a camel driver took Albert through the country he would later paint, the dreamtime places of his Aranda people.

As a citizen Albert Namatjira could now also buy alcohol. In keeping with Aboriginal custom, Albert’s friends expected him to share any alcohol he bought. But in doing this he broke white man’s laws. In 1958, police charged Albert with supplying alcohol to Aboriginal people. He denied the charge, but the court didn’t believe him. After two months in prison, Albert emerged a free, but broken man. He had lost his will to paint, and to live. Albert Namatjira died in 1959. He was just fifty-seven years old.
Albert Namatjira’s life and work have inspired other Aboriginal people to paint. Among them have been his children and grand-children. This great painter captured Australia’s heart in artwork and was praised around the world. His life showed white Australians the injustice of racist laws, and contributed to long overdue changes for his people.